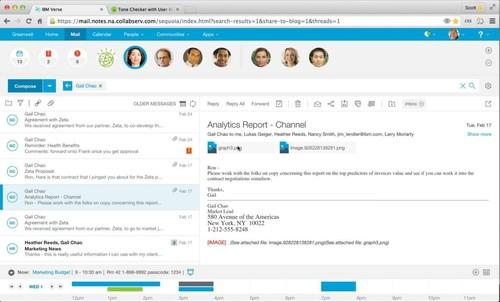 Google has tried it with Inbox, Microsoft has delivered Delve to Outlook Web App users and now, with Verse, IBM is giving webmail a new look by teaching its venerable Domino mail server new tricks.

IBM’s goals with Verse, released Thursday, include eliminating clutter, user understanding, and removing the boundary between messaging and social media across the enterprise.

The interface makes it easier to identify the people involved in a conversation and how they relate to each other, and to trace all communications with them by clicking on their photos.

Given the constraints of messaging, IBM’s restructuring could not go further: the interface still has two panes, with the list of messages on the left and the preview of messages on the right. But around this, IBM has introduced a number of cool features.

At the top of the screen, for example, is a toolbar that Verse’s senior product manager Scott Souder calls “the important area for me” – the brand department clearly has work to do. . This shows, on the left, a user’s favorite contacts and, on the right, key contacts selected by Verse. IOS 8 users see something like this by double-clicking their device’s home button, although Apple wastes a huge amount of space by allowing favorite contacts to appear in the recent list as well, a fake -not that IBM avoids.

For now, Verse is looking at the frequency of communications to determine who is the key, rather than just listing the most recent contacts. In the future, he could analyze a mailbox and directory more in depth to determine which contacts are the most important, Souder said.

Clicking on a contact’s photo – or a contact’s name in almost any Verse context – displays more information about recent communications with the person and offers the option to send an email, message or a videoconference if the user account allows it.

Another important feature at the bottom of the screen is a side-scrolling calendar that shows today’s appointments with horizontal bars. The title and location of the current event are always displayed, while hovering the mouse over other event bars displays their details. This minimalist layout allows Verse to display the most important calendar information without switching to another screen.

In discussion threads involving many different people, it can sometimes be difficult to know who is who and why they are involved. Verse can help by drawing a flowchart of how recipients of a message are connected to each other. To avoid embarrassment or leaks, Verse explicitly highlights the names of recipients outside of the organization.

This is just the start, according to Souder, and IBM is already considering adding a personal assistant to Verse using technology from its Watson division, and opening up the platform to third-party developers. This could result in the integration of information from external networking tools such as LinkedIn or Twitter.

Links to external social networks are already a feature of Outlook Web App for Office365 subscribers, and Microsoft continues to develop a new offering, Delve, to enable content and contact discovery.

Google, meanwhile, is taking its own approach to decluttering with Inbox, an invitation-only front-end to Gmail that claims to make the most important emails appear in a user’s mailbox by grouping them into “Bundles.” associates.

It remains to be seen whether their efforts will be enough to persuade organizations that email-centric systems are still the best way to communicate internally. Customers may be tempted by the siren call from unified communications providers like Unify, which combines video, voice calls, chat, and email into one conversation on its Circuit platform. Or they can turn to a new category of tools from startups like Slack or Glip, which sell collaboration tools built around instant messaging.

When IBM launched Verse’s private beta test in mid-November, it announced it would release the software in the first quarter, a deadline it narrowly missed.

The web version of Verse is out now, with an iPhone app to follow later this month, an iPad app at the end of next month, and an Android app in late June, Souder said. Organizations must place their mail on a Domino server to use Verse, although IBM offers to host basic mail and calendar functions on Domino for free, Souder said.