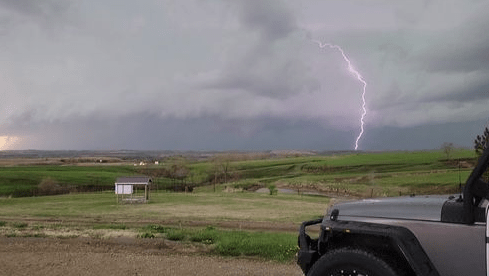 A new month has begun and with May underway…severe weather is becoming the #1 item around these areas…or at least it usually is. The last few months of May, however, have not been so busy in these regions at least. This too can be said for many parts of the Plains… but this May things are different and we are starting to see more and more activity springing up.

Things “seem” more typical this month…and so have the past two weeks from a severe weather standpoint. The worst of the severe weather in the southeastern part of the country seems to be generally over (which is typical now) and the plains seem to be getting more active (which is also typical).

Yesterday tornadoes erupted in SW TX…which is normal for early May as well. We are seeing more active dryline installations on the plains and although today is a bit different from that perspective, there are some variables that need to be watched for extreme weather conditions in the area.

Today: Cloudy with showers developing throughout the day. It won’t rain all day and there will be noticeable breaks, but it will be a bit more uncertain later this afternoon in particular. The risk of thunderstorms increases later in the day and this evening. These storms should be watched for threats of hail and wind…and possibly even a tornado threat south of the region. Temperatures can struggle after lunch… with readings only around 60°. Breezy too with 15-25 MPH winds

This evening: Evening thunderstorms are moving away… some could be severe on the MO side in particular and US 50 south with winds and larger hail possible. Temperatures drop into the 40s at daybreak

Tomorrow: Clouds with possible late clearing. Cool with tops only in the 50s

Wednesday: Initially dry but the chance of rain increases later in the day with highs around 60-65°. Breezy too.

The month of May has therefore arrived and, with it, the risk of violent storms. As mentioned above, we have been quite lucky for the past two years in May and early June…but that luck may not hold this year.

Climatologically, we see the chance of severe weather shifting north as temperatures in the south get warmer…as gulf moisture finds it easier to flow north and as the jet stream begins, its season passes from the south to the north of the United States and Canada before summer. months…there is about a 6 week window where this area is particularly vulnerable.

We’ve seen the Plains light up before… Friday was kind of a more typical Plains severe weather outbreak with a strong dry line… a late weakening of the precautionary ceiling and an upper disturbance/wave helping to kick things off.

By the time the storms got to us…they were mostly wind turbines. Especially in the 40-60 MPH range as they drove through the subway. There was a brief tornado near Mayetta, KS. Some non-violent hail too, but basically it was a weakening line of storms from storms that had developed earlier in central KS, including the EF3 (+?) tornado that hit Andover, KS Friday night, some 31 years after the F5 tornado devastated that community.

The above information is preliminary.

There was also tornadic activity closer to the Topeka area, including an EF1 tornado.

Luckily there were just too many storms battling for the weakening instability over the KC area as the line moved in our direction…so we only had the wind aspect of the storms.

Today’s threat is complicated for us due to the likelihood of showers and preliminary thunderstorms that could contaminate the atmosphere above the KC zone. This may effectively cool our lower part of the atmosphere enough to keep the threat of higher storms in several counties south of metro KC.

That said… as conditions become more favorable for stronger storms later in the day… and as they travel NE… I notice the air above us, despite the likelihood of stronger air cool surface (perhaps only around 60° later today) will be decently unstable and the atmosphere above will actually be conducive to rotating storms.

What can happen in these situations, assuming we HAVE cooler surface air… is that storms can produce hook type returns on the radar BUT because the surface air is being cooled by rain , a tornado will not form BUT storms rotate and allow for larger hail to develop and that is a possibility with this configuration.

SPC has a slight risk (level 2/5) of severe weather nearby but still several counties south of the metro and an increased risk (level 3/5) of severe weather well south of the region with a moderate risk in the DO OK. Adjustments to this forecast map are possible today as we get a better beat of the rain which will be the setup to hopefully keep the worst of the weather well south of here

One concern I do have though is IF we manage to see fewer preliminary showers/thunderstorms during the day…this could allow the low pressure surface to migrate further north to the I-70 corridor area early this evening. IF this happens, storms have a higher chance of producing more severe weather…and yes, even a chance of a nearby tornado or two. The broadcast so far this morning shows this is less likely to happen as the surface storm is forecast south of the KC zone

IF the surface low dips towards Butler then Sedalia…that risk will be well south of KC…but worth watching.

My inclination is that the tornadic threat is south of the region towards the I-44 corridor area north towards Hwy 54 near the central MO lakes region.

The only other issue is whether or not decent storms will kick in on the KS side tonight and come through here later tonight…it’s possible. Some hail and wind are possible with this, but depending on how things go so far this morning…chances are the biggest severe weather threats are well south of the KC metro area more late in the day and tonight.

This system will likely leave a streak of cloud in its wake through tomorrow with perhaps some clearing later in the afternoon or evening (maybe). As a result, we can fight tomorrow to get out of the 50s