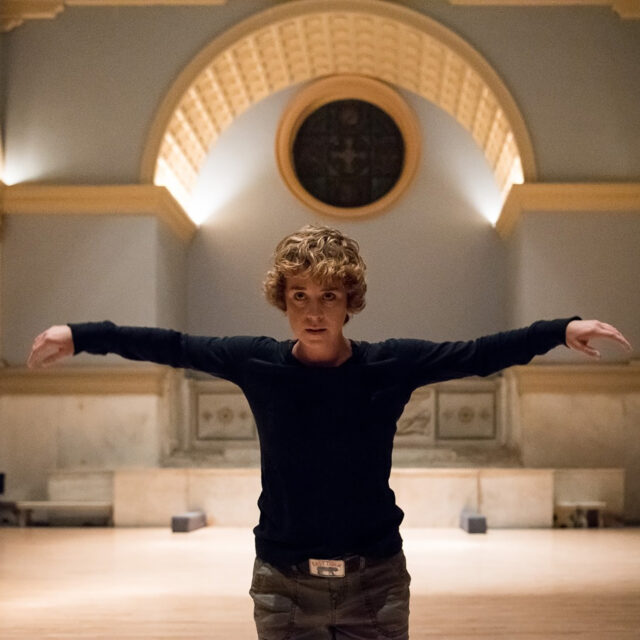 The filmmaker started early with the VHS camcorder

As a teenager, Charli Brissey shot videos of family and friends with a large VHS camcorder.

It was the start of an award-winning filmmaking career that blends dance, science, technology, live action and animation with innovation.

Brissey, who uses the pronouns they and them, is an assistant professor of dance at the School of Music, Theater and Dance. They love both dance and film, and said the latter allows them to express their creativity in new ways.

“What I love about filmmaking is a different kind of palette of options,” Brissey said. “I can kind of bend time and space in ways that I can’t do with dance.”

Brissey’s films have been shown in galleries, conferences, film festivals and performance halls around the world. Many of them include queer or movement- and dance-centric content.

Films are often categorized as experimental, meaning they have a non-traditional narrative and are generally driven more by visual or cinematic qualities than any particular storyline.

One of their most recent projects, the video-animated hybrid film “Canis Major”, is about a writer who has writer’s block but is able to get through it with the help of his dog. . The film toured 17 countries and won numerous awards, including Best Experimental Film at OUTFEST and the Richmond International Film Festival.

Brissey does not follow a set process or pattern when making a film.

“It’s always different. It’s always incredibly non-linear or unplanned,” Brissey said. “I don’t do big storyboards. I don’t pre-plan a lot of content or editing. Much of the filming and editing is done in a fairly improvised fashion, and that often changes over time.

“I had a big camcorder that I brought to school every day. I was writing scripts and getting my friends to be the actors,” they said.

Brissey earned a Bachelor of Fine Arts in Dance at Virginia Commonwealth University and studied Kinetic Imagery there.

“That’s when I really dove into experimental video work and integrated my dance training with my filmmaking desires and skills,” they said.

Brissey holds two master’s degrees, in kinetic imagery and dance. They have been working at UM since 2018 and teach film, composition and technique classes in the dance department.

Brissey’s latest project, “future fish,” will premiere in March at the Handy Jam in Detroit. It is a live iteration of “Agua Viva,” a multi-year research project exploring the choreography of oceans, aquatic systems, and the seabed as potentially radical sites for reimagining Earth’s future.

Brissey and an MFA dance student will perform in the play as the last two fish left in the sea. They hope to tour the East Coast and Midwest with “future fish” later this year.

Brissey also has a book project. “Dance We Must: Choreographies of Space, Time, and Emergent Matter(s)” incorporates self theory, speculative fiction, and movement scores from US-based dance artists to illuminate the potential of choreographic thought in the creation of socio-political and ecological landscapes.

Looking ahead, Brissey plans to continue finding new ways to reach people with her art.

What memorable workplace moment stands out?

Last winter I had an outdoor movie shoot with dance majors where we set up a green screen in a foot of snow and danced on a tarp. It was the only way to get there due to COVID-19, and it was totally absurd and fantastic. Such a glow of joy in the midst of so much loss and sadness. This project really helped me (us?) through this horrible pandemic winter.

What can’t you live without?

Name your favorite place on campus.

I don’t know if that counts, but I really like Sava. This is one of the first restaurants I’ve been to while visiting campus, and whenever I have guest artists, visiting scholars, or friends in town, we almost always end up there at the end of the working day. It’s become that place that I definitely associate with work, but the fun side of work. The more social “after hours” part of the job that allows for different types of connections and conversations.

I am inspired by people who are bold, risky and eager for new ideas. Regardless of the content of the project. It can be anything from food to quantum physics to movies. When people are really into what they’re doing – especially when it involves something bigger than themselves – I find that energy very intoxicating.

What are you currently reading?

I tend to read many things at once. The two that occupy my time the most right now are “Her Body and Other Parties” by Carmen Maria Machado and “A Body in Crisis” by Christine Greiner.

Who has had the greatest influence on your career path?

I learned a lot about being an artist in academia from my graduate school mentors: Jennifer Monson, Tere O’Connor, Cynthia Oliver, and Sara Hook. Without them, I would be a mess right now. Also Octavia Butler. Whenever I start to feel like I don’t know what I’m doing, Butler always puts me through.